As the remnants of tropical storm Hermine were approaching the Hampton Roads area and leaving no doubt that we were going to have a very wet and windy Labor Day weekend, I had anticipated knocking off a handful of tasks from my “to-do list” while we hunkered down.   What I failed to consider was that almost all of those tasks required electricity.  An entire Saturday with no power slowed me down a little bit but I still managed to get most of my chores done for the weekend.  This blog post was the last on the checklist.

Before I get to my latest through-the-mail-autograph success, let me tell you about the time I took my father-in-law to one of our local AAA baseball games.  As the players were warming up, he looked at the first base line and asked me what the chalk line just outside of the first base line was.  I had always just known it as the “runner’s lane”.  I told him from what I had been told, as the runners ran to first base, they were supposed to run between the baseline and the outer line.  Per the official rule (Rule 6.05K actually); if a runner is within the runner’s lane and is struck by a thrown ball (usually by the catcher), he cannot be called out for interference.  As we watched, we saw that very few of the players adhered to the rule and who can blame them really. 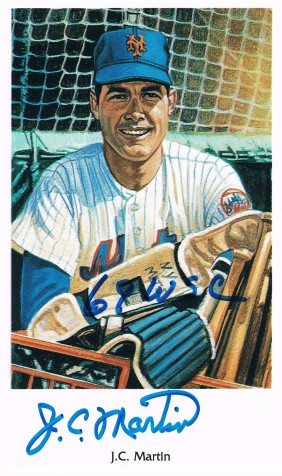 As a batter leaves the batter’s both, he usually runs directly to the bag which is in FAIR TERRITORY.  This makes the most sense as the runner’s lane is in FOUL TERRITORY.  Given the fact that the shortest distance from point “A” to point “B” is a straight line and using the runner’s lane would require the batter to veer off to the right side of the line, why would they use the runner’s lane?  I could see it for a left handed batter who leaves the box on that side of the base line anyways, but had a hard time catching a right-handed batter using the lane at all.

Anyways, we could sit here all night and look at scenarios where the runner either should, or should not be called out for being struck by a thrown ball but I’d rather chat about the Ron Lewis postcard that Mr. Martin was kind enough to sign for me.  After all, it was Mr. Martin that was involved in the play that resulted in the runner’s lane being added to all baseball fields.

After being an integral part of the Chicago White Sox (1959-1967), Martin was traded to the New York Mets in 1968 to serve as a backup catcher to Jerry Grote.  It was in the 1969 NLCS that Martin found himself pinch hitting in the 8th inning for Tom Seaver and driving in Al Weis and Ed Kranepool.  That five-run eighth inning helped the Mets defeat the Atlanta Braves by a score of 9-5.  The Mets went on to sweep the Braves on their way to the World Series.

In game 4 of that series against the heavily favored Baltimore Orioles, with the Mets leading two games to one, Martin was involved in the play that changed the baseball diamond forever.  With the game tied 1–1 in the bottom of the 10th and pinch-runner Rod Gaspar on second base, Martin squared a bunt back to the pitcher’s mound.  Baltimore pitcher Pete Richert scooped up the ball and threw to first base.  The ball struck Martin on the left wrist and caromed towards the dugout.  The errant throw allowed Gaspar to score the winning run. 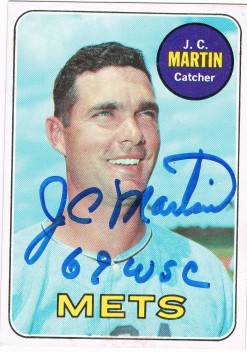 Replays later showed that Martin was running inside the baseline and because of this, could have been called out for inference.   Stating that Martin did not intentionally interfere with the play, the umpires stood by their call.  Martin was awarded first-base, Gaspar scored, and the Mets would later go on to defeat the Orioles in that World Series,

It was this play that resulted in the running lane that extends from halfway down the first-base line to the bag to be added to all major league fields.

I’m excited to add these two Martin signatures to my collection and am always happy to learn interesting facts about players of the past.