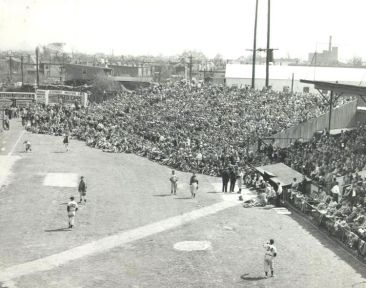 Recently I came across a few photos of High Rock Park which was located in Norfolk, VA right near the intersection of Church and 20th Street.  Home to Norfolk Tars who were a Piedmont League minor league affiliate to the New York Yankees, the 6,500 seat park was dedicated on July 15th, 1940 in front of a crowd of thousands.  The Norfolk Tars would go on to lose that inaugural game to the Richmond Colts in front of a sold out crowd.  The name of the park is often questioned in discussion as the location is neither “high” or “rocky”. The park was actually built on a location that is low and sandy.  The name “High Rock Park” was actually chosen by the High Rock Bottling Company which paid $1,000 per year for naming rights.

The left field fence butts up against the old Norfolk & Western Railroad tracks.  It is said that during an exhibition game, Babe Ruth hit the “longest home run in history” as the ball sailed over the fence and landed in a rolling coal car bound for West Virginia.  (It should be noted that several other cities have similar stories involving Ruth, home-runs, and coal cars.) 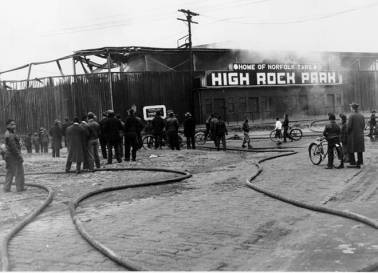 In 1944, the park sustained massive damage due to a fire and was rebuilt by local dentist and owner of the Tars, Dr. Eddie Myers.  Dr. Myers added 1,500 additional seats, changed the name to “Myers Field” and reopened the park which went on to host Norfolk Tar baseball games until 1955.

The Norfolk Tars played mediocre baseball in the 1940’s and never found themselves winning more than one pennant (1945), the Tars did serve as a starting point for a handful of baseball legends.  Notably, Yogi Berra, Lew Burdette, Whitey Ford, Bob Porterfield, Chuck Connors, Tom Gorman, and Clint Courtney.

The 1950’s provided better Norfolk Tar baseball and along with a general manager who promoted the team very aggressively, Myers Field was often sold out for home games.

One of his promotions was “swimsuit night” and he put an ad in the Virginia Pilot that the best looking girl would win $100.

“On the the night of the swimsuit contest, the fans kept coming and coming.  They all wanted to get a look at these girls in swimsuits and we must have had a crowd of over 10,000 people.  The only problem was that only one girl had signed up to be in the contest.  About an hour before the game, the general manager started to panic and kept saying, ‘What in the hell am I going to do?’  He fretted a little while longer and said, ‘We advertised a swimsuit contest, so we’re going to have a swimsuit contest!  I need some volunteers!’

He then hopped in his car, drove over to Sears and came back with a bunch of wigs, bras, ladies’ shorts and shoes in his hands.  While he was gone, his wife came down to the dugout and put all sorts of makeup on us.  He handed us these get-ups and we got dressed for the contest. 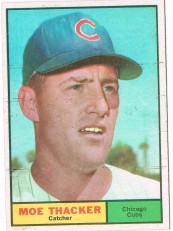 .
She was a knockout.  We let her go out onto the field first and when she came out in a leopard print bathing suit and high-heels, the crowd went nuts.  I was next in line and since I’m from Rhode
Island, the announcer announced me as ‘Miss Rhode Island.’  Jim Coates, our big 6’4″ who later played for the Yankees came out as ‘Miss Virginia.’  Bob Rack was ‘Miss Missouri’ and Moe Thacker was ‘Miss Illinois.’

We all looked funny as hell stumbling around in high-heels and bras but the funniest of all was my double-play partner Stan Rosenzweig.  Introduced as ‘Miss Brooklyn’, he was short and stocky with hair all over his body that made him look like a little bear out there.  He had stuffed two baseballs into his bra and on his way back to the dugout, he took them out, showed them to the crowd, and then put them back in.  He then called one of his buddies from the other team and told him to come out onto 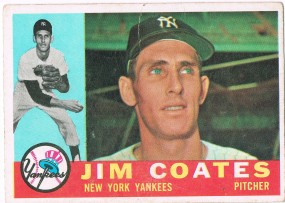 the field.  “Rosey” jumped into that guy’s arms, pulled one of the baseballs out of his bra and said to him, ‘Why don’t you come up and see me sometime big boy?’

The fans all thought this was a riot and what we thought was going to be a flop of a night turned out to be a helluva time!”
Myers Field was torn down in 1955. I recently drove by the location (photo below) and sadly, nothing is left but an empty lot that has probably been a handful of other things in the past 60 years.

It is hard to believe that this is the same spot where a 17 year old Yogi Berra got his start.   Struggling defensively behind the plate, Berra went on to hit 7 home runs and knocked in 56 RBI’s in 1943, his lone season with the Tars before moving on to the New York Yankees, 18 All Star Games, 13 World Series rings, and eventually the Hall of Fame. 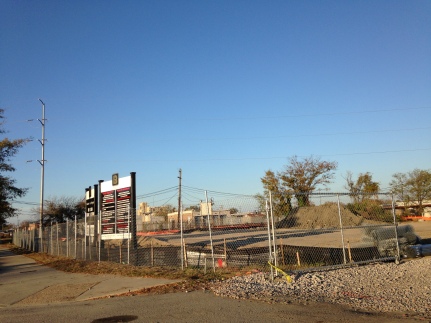 Note – the Tom Vinditelli story above can be found in Mike Shannon’s book: Tales from the Ballpark. 1999.