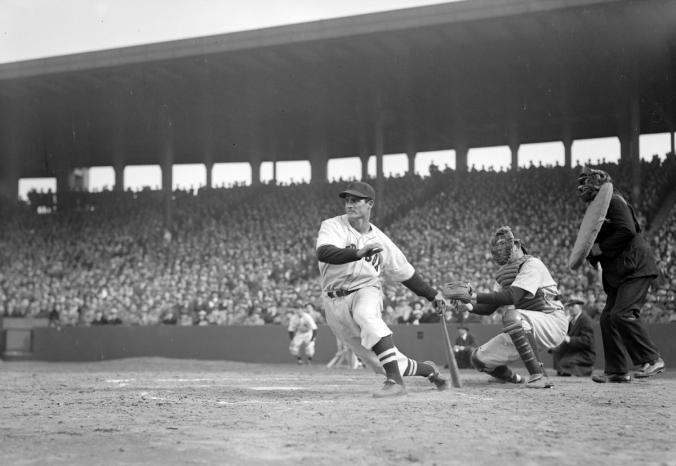 One of the most productive 2nd basemen of all time, he was a nine-time all star, batted over .300 three times and drove in more than 100 runs in six different seasons.  Defensively, Doerr capped his career with an incredible .980 fielding percentage.

Doerr served in the Army during World War II and missed the 1945 baseball season. He returned the next season, helping the Red Sox win the pennant. During the World Series against the Cardinals, Doerr batted .406 with one home run and three RBIs.

After his playing career, Doerr served as a scout for the Red Sox from 1957 to 1966 as well as a minor league hitting instructor.  Hired as the Red Sox first base coach in 1967, he would see the World Series one last time, eventually losing to the St Louis Cardinals.

The 1967 season also saw a turning point in the seven-year veteran Carl Yastrzemski’s career.  Working with Doerr that year on his hitting, he turned into a pull-hitter who belted over 44 home runs, won the Triple Crown and AL Most Valuable Player award that year.  Prior to 1967, Yastrzemski had never hit more than 20 homers in a season.

One of my favorite baseball books is Teammates: A Portrait of a Friendship by David Halberstam.  The book details the lifelong friendship of four very different men who have transitioned from once great baseball icons to men dealing with the challenges of growing older.   Those men are Bobby Doerr, Ted Williams, Johnny Pesky, and Dominic DiMaggio.  As Ted Williams lay dying at his home in Florida, Pesky and DiMaggio begin a 1,300-mile road trip to visit Williams and say their last goodbyes.  Doerr, the fourth member of the group is unable to join them as he remained home in Oregon to care for his wife suffering from a recent stroke.

A clear fan of these men, Halberstam does a great job of recounting historical details and first-hand accounts about the men’s playing days and characters – warts and all.

Williams and Doerr were unlikely of friends.  Williams, was clearly the better player of the two but what he possessed in athletic ability, he equaled in character flaws. Williams always admired Doerr as he represented all of things that Ted wished he was, and had – the balance, the faith, the family life and the ability to not get overwhelmed.  For all of Williams’ volatility and explosiveness, Doerr was always willing to serve as the silent and reticent leader of the Red Sox.

The two argued frequently over the best approach to hitting a baseball both during their playing days and well after.  Whether it was over a long-distance phone call to Ted in Florida from Doerr’s home in Oregon or sitting beside each

other in a fishing boat.

Williams argued the best swing was a 12-degree uppercut, to meet the ball perpendicularly as it came down from the pitcher’s mound.

Doerr countered that he liked his hands a little above the ball, not chopping down, but enough to impart topspin that helped a drive carry farther.

One thing the two did agree on was fishing. Doerr said, “Ted Williams used to say for every day you fished, it added a day to your life and I kind of think that maybe it could be that”.