I’m a “set” guy.  I like choosing a set and hunting down each piece of the puzzle. Admittedly, I’ve lost interest in completing a few of the recent sets I’ve set out to complete.  The Heritage sets with their high-number cards are just too much of  a challenge for my taste.  I prefer sticking to base sets with the exception of the Topps Gypsy Queen sets which have just the right amount of short-prints and variations to keep me interested.

With each new flagship Topps release, I will hand-collate the base set.  It usually takes me all year but I always manage to get it done before the World Series hits.  This year, as I slid the last card of the Topps Series 2 set into it’s final page sleeve I decided that I should do a blog post featuring my favorite 10 cards in the set.

The problem was, I had more than 10 cards that I wanted to feature.  Topps has come a long way with their flagship sets and the photography.  At one point in time, premium photography and exciting shots seemed to be reserved for the Stadium Club sets.  The 2017 Topps design is awesome and I really enjoyed putting this set together.  Here we will look at my top 15 cards in Series 1 and 2.

Once this post is finished, the cards will be taken back out of their pages, tucked into their respective “row” of a monster-box, labeled and up on the shelf they will go to sit and wait for the day they get broken back out to see the light of day.

The ritual drives my wife crazy.  That’s her problem though.

Without further ado, let’s get to the cards and we will fittingly start with #1 in Series 1. 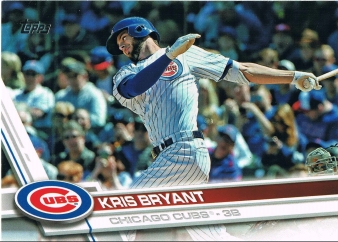 #1 – Kris Bryant – The Chicago Cubs World Series Champion and National League Most Valuable Player graces Card No. 1 and joins a long list of great players who have been represented on the first Topps card of the year from Jackie Robinson and Ted Williams to Mike Piazza and Derek Jeter. I’ve always loved the horizontal cards and Bryant was actually chosen by baseballs to get the coveted #1 card in this year’s release.  The one-week online vote occurred in October of last year where fans chose from a list of 16 nominees on Topps.com. Topps started the Vote for Card No. 1 in 2016 when Angels outfielder Mike Trout earned the honor in the inaugural vote. 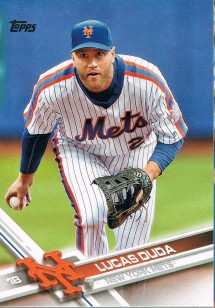 #236 – Lucas Duda – As a Met’s fan, we can start here.  I love the throwback Mets uniform in this shot and the fact that it’s not even Lucas Duda on the card.  The first time I pulled this card, I stared at it and knew something was off.  The photo is actually of utility player Eric Campbell who is not even playing in Major League Baseball anymore as he signed with the Hanshin Tigers last year.  The corrected version of the card was released in factory sets and the New York Mets team sets only.  I’ll track the corrected one down on the Bay at some point. 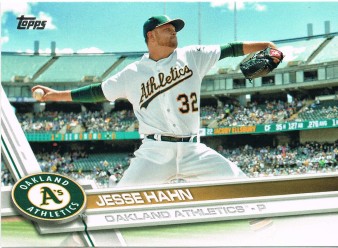 #140 – Jesse Hahn – Here we have a nice crisp shot of the A’s starter.  For some reason,
I feel like cards with daytime photos shot in California always seem to have a “brighter” feel to them.   Check out any older A’s, Dodgers or Angels cards and you’ll see what I mean.  In this particular photo, Topps captured Hahn using one of the warm-up mounds in foul territory at Oakland Alameda Coliseum.  You can also see “Jacob Ellsbury” featured on the ticker tape scoreboard in the background.  This would likely date this photo as May 22, 2016 which was a day game against the New York Yankees.  The Bombers would go on to take that game 5-4 with Ellsbury using the 3rd inning to drop a Hahn fastball over the deep center-right field wall for a home run. 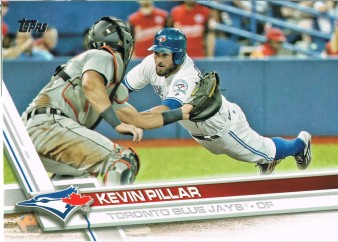 #6 – Kevin Pillar –   Cards featuring plays at the plate are always popular with me.  I think the first play at the plate card I owned was the 1987 Topps Wally Backman.  Ever since then, I’ve been hooked.  Topps zeroed in on this July 7, 2016, sixth inning play at the plate as Detroit Tiger catcher James McCann tags out Toronto runner Kevin Pillar.  The Jays would go on to beat the Tigers 5-4 behind 3 RBI’s from Troy Tulowitzki. 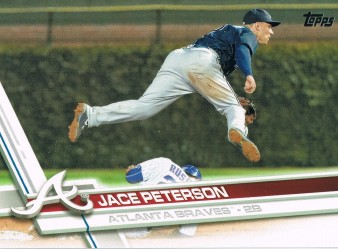 #133  -Jace Peterson – This is actually one of three really nice “double-dip” action shots in the set.  The Braves second-sacker has split most of the 2017 season between AAA Gwinnett.  A versatile player who can play all infield positions as well as the outfield, if he can perform at the plate, he will be a key player for Atlanta. 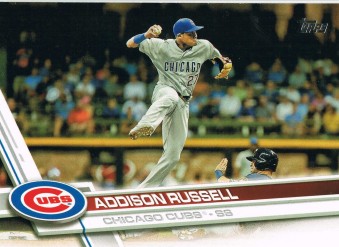 #36 – Addison Russell – Probably one of the most notable cards of Series 1 due to the fact that this card (along with the Bryce Harper variation) were featured in most of Topps pre-release marketing.  Collectors were seemingly very familiar with it before the set was even released.  Despite that, it’s an awesome card.  The partial full-bleed design of the set works really well with this card.  I love the clarity of Russell and the base-runner against the blurred out background.  Very effective card that captures the moment. 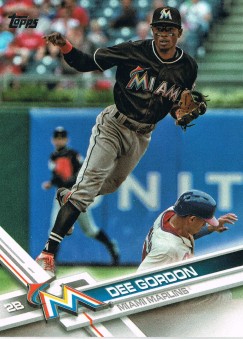 #443 – Dee Gordon – Here we have a great action shot featuring Gordon turning a graceful double-dip against the Phillies Cesar Hernandez.  This photo was from the September 18, 2016 game between the Marlins and Phillies at Citizen’s Bank Park.   The Marlins would take this game from the Phils by a score of 5-4.  In addition to a slick-fielding lead off hitter, Gordon is known also as the son of former Royals and Phillies pitcher Tom Gordon.  I will always remember the emotional lead off home run he hit in his first at bat after the untimely passing of teammate Jose Fernandez. 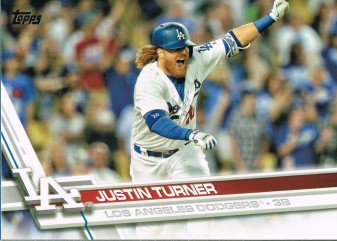 #251 – Justin Turner – As Justin Turner played here locally in 2009 & 2010 with the Norfolk Tides; I’ve followed Justin Turner’s career pretty closely over the years.  After being let go by the Mets in 2013 as just one of the many bone-headed moves by Met’s general manager Sandy Alderson (how does that guy still have a job?), Turner rebuilt his swing and overall approach at the plate and is currently an All-Star as well as one of the most feared hitters in the league.  Imagine a Met’s infield with Turner at third and Murphy at second.  I not only love the photography on his 2017 card, but I think it looks great in the sideways landscape format.  This photo is from the June 17, 2016 game between the Los Angeles Dodgers and the Milwaukee Brewers and features Turner celebrating his walk-off RBI single which won the game in the 10th inning.  He had also tied the game in the 8th with two run homer. 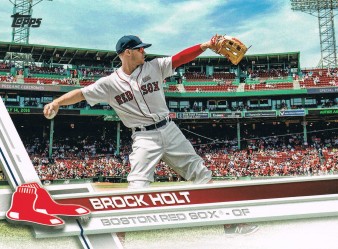 #581 – Brock Holt – Another great landscape shot from Topps.  Featuring Brock Holt warming up between innings or before a game, you see a beautiful sky in the background as well as the telltale signs of the iconic Fenway Park.  I can actually imagine myself sitting in the front row at this game. 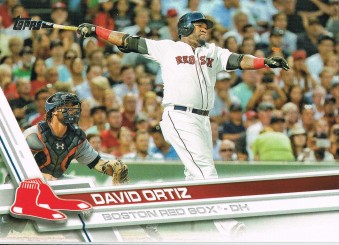 #350 – David Ortiz – As Nick over at the Dime Box baseball card blog would call it, this is Ortiz “sunset card”.  Topps did a fine job of capturing Ortiz’ graceful swing launching of his last home runs into the bleachers at Fenway Park.  This photo was taken on July 26, 2016 in the third inning and happens to be a 3 run homer.  San Francisco Giants catcher   Jarrod Saltalamacchia is also featured in the photo.  An absolute first ballot Hall of Famer, Ortiz has been a fan-favorite for years and will go down as one of the most beloved Red Sox players.  I have to admit, I’m huge Ortiz fan and this card marks the end of a career that was thrilling to watch every step of the way.  I’m still on the hunt for a copy of his 2013 Topps SSP “Boston Strong” card. 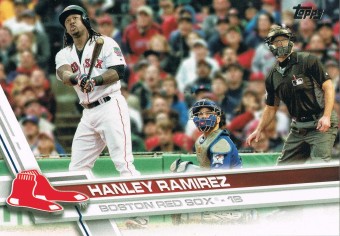 #508 Hanley Ramirez – Topps really outdid themselves with the Red Sox cards this year as their are so many great shots of them.  Here is another great landscape shot featuring Hanley Ramirez watching his 7th inning home run against the Blue Jays on October 2, 2016.  I love how the catcher and the umpire are both featured in this card as well.   Despite the efforts of Ramirez, Toronto would go on to win the game 2-1 and clinch the Wild Card spot.  Coincidentally, this game was also the last home game of Big Papi’s career. 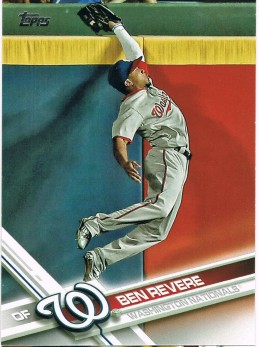 #324 Ben Revere – Taking a break from the BoSox, let’s move over to the Washington Nationals and take a look at this great shot of speedy outfielder Ben Revere robbing Atlanta’s Freddie Freeman of a home run during the fourth inning of their August 19, 2016 match up.  You can watch a video clip of the grab HERE.  The Nats would go on to take this one from the Braves 7-6.  This grab was one of the few bright spots in Revere’s season and 2016 would be his only season with the Nationals.  He was picked up by the Los Angeles Angels this past December. 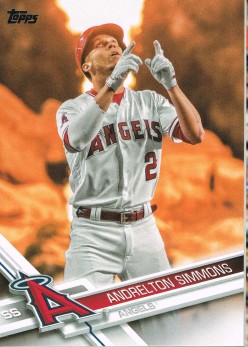 #520 Andrelton Simmons – Topps took advantage of the flame throwing backdrop of Angels Stadium to capture Simmons celebrating a double.  Simmons was traded to Los Angeles from Atlanta last November so this is his first card in an Angels uniform. 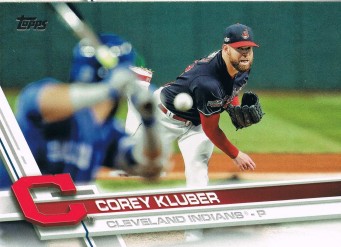 #669 Corey Kluber – If you’ve ever wondered what it would look like to stare down the pipe of a Kluber fastball, this would probably be a pretty accurate example.  This photo was from the 2016 ALDS matchup between the Cleveland Indians and Toronto Blue Jays. The Tribe would go on to take the game from the Jays 2-0.  2017 has seen Kluber be as good as any pitcher in the game could be and the Indians are currently leading their division by 8 games.  This year I put my Cy Young bets on Kluber or Chris Sale. 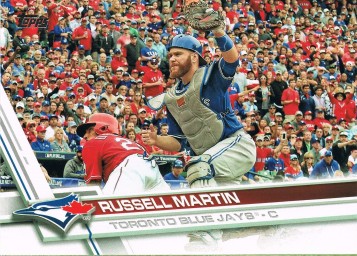 #576 Russell Martin – Topps has made a concerted effort to feature key moments from the prior season and this card is exemplary of that effort.  Here we have a a close play at the plate in the seventh inning of Game 2 of the explosive 2016 ALDS between the Texas Rangers and the Toronto Blue Jays.  After a lead off double by Ian Desmond, Adrian Beltre hit into a fielder’s choice leading to Desmond being tagged out at the plate.  This was the second meeting between the Blue Jays and the Rangers in the postseason, the first being the 2015 American League Division Series in which the Blue Jays defeated the Rangers after losing the first two games at home, which was marked by a controversy-laden deciding Game 5 defined by José Bautista’s bat flip.  It was also the first series between the two teams since May 15, a game which featured multiple bench clearing skirmishes and the infamous Rougned Odor punch of Bautista.

Have a great Labor Day everyone.